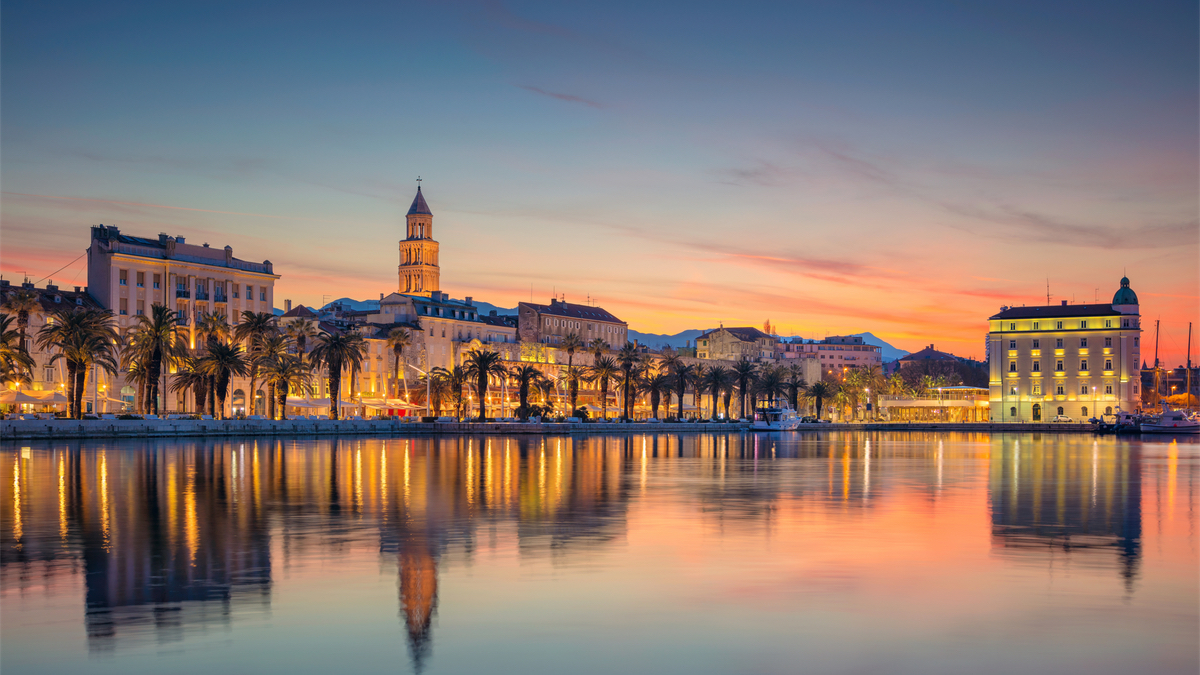 In Croatian, fjaka means a laid-back approach to enjoying the moment – here’s how to do that over leisurely lunches, palace visits, and a pair of beloved sun-soaked islands.

For centuries, aristocrats have frequented Croatia’s Dalmatian Coast, a 233-mile southern stretch fronting the Adriatic Sea. Roman emperor Diocletian built a palace to retire here, and the Habsburgs regularly swapped Austrian winters for warmer temperatures along the Adriatic coast. Perhaps it’s the fjaka (pronounced fee-ya-ka) that drew them in – a Dalmatian mindset that celebrates taking your time and enjoying the moment. You’ll see the approach in towns up and down the coast, where residents linger for hours over a cup of espresso or sit peacefully in a sunlit square.

“You don't need more than a day to fall in love with Split [Dalmatia’s largest city],” says Virtuoso travel advisor Valentina O’Kane. “Everything about it is spectacular: its laid-back personality, cultural pride, history, and its people.”

To set off on your own laid-back retreat along the Dalmatian Coast, start in Split, located on a peninsula jutting out into the Adriatic, and then hop over to the islands of Brač, Hvar, or Šolta. Here’s how we’d envision the aristocracy enjoying the region today. 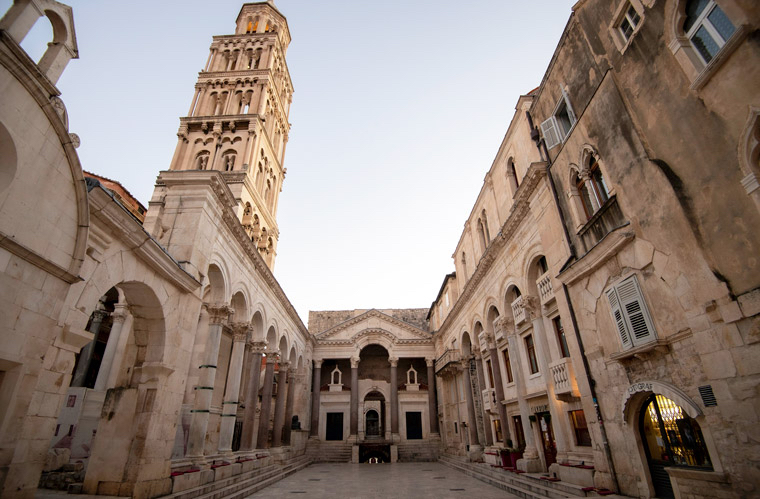 In the year 305, after 20 years as head of the Roman Empire, the Dalmatian-born Emperor Diocletian moved into his retirement home, a white limestone palace that housed several apartments, three temples, a ceremonial court, and his future tomb. Today, this partially ruined residence is woven into the fabric of Split: Former hallways are now streets lined with wood-fired-pizza spots and gelato shops serving Dalmatian fig ice cream. That said, plenty of Diocletian’s Palace remains intact – a few thousand residents even live in converted apartments within the former complex. Your Virtuoso travel advisor can work with tour companies, such as Calvados Club Luxury Travel – Croatia, to arrange private tours of the grounds or visits to more Game of Thrones filming locations across the region.

After working up an appetite, head to a konoba (tavern) to sample local delicacies, including black risotto with squid ink, brudet (a traditional seafood stew) or pašticada (braised beef cooked in a sweet-and-sour sauce). The family-run Konoba Fetivi, a cobblestone’s throw from Diocletian’s Palace, serves fresh tuna and sea bass as well as rosemary-scented grilled lamb. Feel free to linger: This is the land of fjaka, where no one – prince or peasant – is in a rush to leave. 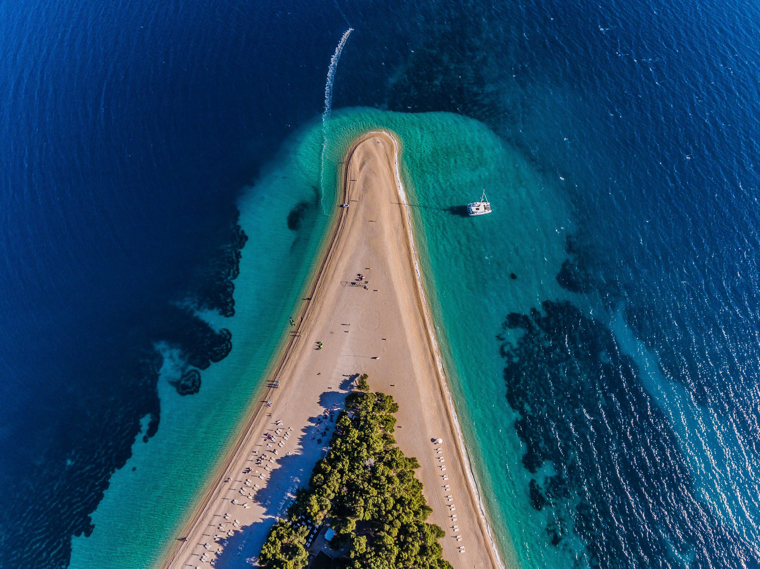 Palaces, cathedrals, and royal residences across the Dalmatian Coast were built with stone from Brač (pronounced “Brach”), a 153-square-mile, pine-forested and olive-grove-dotted island. Today’s travelers come for leisure rather than labor, taking 50-minute ferry rides from Split to enjoy the shoreline and relaxing atmosphere. Zlatni Rat (meaning “Golden Cape”) is often cited as one of the world’s best beaches for its spit of sand off the island's southern coast. Lounge on the (surprisingly comfortable) pebble beach, taking intermittent dips in the sea, before hiking to the nearby peak of Vidova Gora for views stretching over Zlatni Rat and the Adriatic before digging into some of the traditional lamb dishes the island is famous for.

“On a trip to Brač, we spent the day walking along Zlatni Rat, rented beach chairs and found a shady space under some large pine trees,” says Virtuoso advisor Joseph Dujmovic. “Relaxation at its finest.”

Limestone-clad wine cellars and wood-paneled wine bars line the streets of Bol, a seven-minute drive or 20-minute walk east of Zlatni Rat. Try a glass of plavac mali wine (the name means “small blue,” referring to the grapes it’s made from) or a zinfandel, a grape often associated with Napa Valley, but which originated from crljenak wine on the Dalmatian Coast.

Croatians also have their own special take on brunch. Ask for the marenda menu – usually offered between 10 a.m. and noon. (Some restaurants won’t even provide it unless asked, which makes you a royal insider just for knowing.) Dishes may include fresh grilled seafood, fried fish, bean stew, or Swiss chard with cubed potatoes. Marenda is often accompanied by bevanda, a local red or white wine with a generous splash of sparkling water. Try it on Brač at the hillside Konoba Tomić, a family-run tavern that serves up fork-tender lamb and roasted seasonal vegetables – and makes its own wine and brandy – in a rustic 800-year-old stone farmhouse. 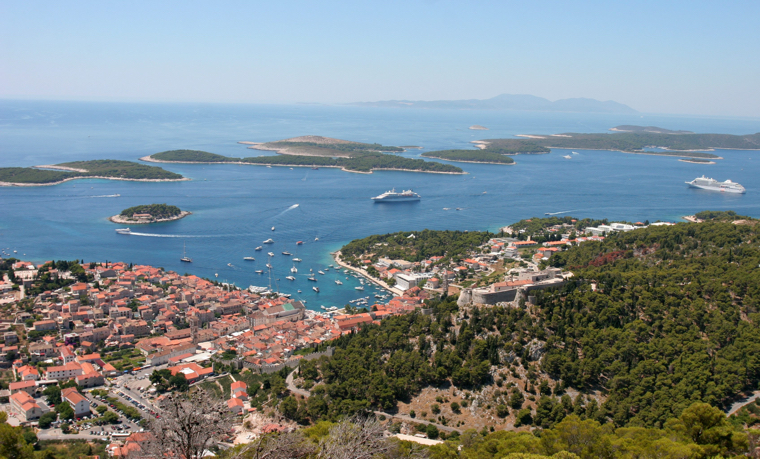 If those fun-loving ancient royals were looking for a getaway full of glitz and natural beauty today, they’d probably head to Hvar. Travelers will spot a yacht-filled marina as they arrive via ferry at Hvar Town, about 30 miles from Split and ten miles south of Brač. This 115-square-mile island (roughly the size of Malta) offers plenty of space for everyone, from nightlife-obsessed types to travelers seeking tranquility among its lavender fields.

Get a taste of Hvar’s signature dish, gregada – a hearty stew of seafood, potatoes, and island-grown olive oil – at Hvar’s lively portside hot spot Gariful. After dinner, walk five minutes towards the waterfront to sink into a plush terrace chair under palm trees at Carpe Diem bar for an Aperol spritz and some people-watching. You can find low-key fjaka vibes in lively Hvar Town while strolling through its white stone lanes or savoring a glass of zinfandel or espresso at an outdoor café on sunny Saint Stephen’s Square.

For a glimpse of the island’s cultural history, take a self-guided tour of Hvar Town’s baroque Public Theatre, open since 1612 (the oldest of its kind in Europe). Visitors can stand on the stage, sit in a private balcony box, or admire the ceiling’s swirling floral details. Or head west about 30 minutes to trade Hvar Town’s bustle for the quiet atmosphere of Stari Grad, Croatia’s oldest town, where you can browse the shops for Dalmatian fig jam or locally produced wine. The 53-room Maslina Resort in Stari Grad, incorporates the soul of Hvar Island into its peaceful suites and villas and an 86,000-square-foot organic garden. 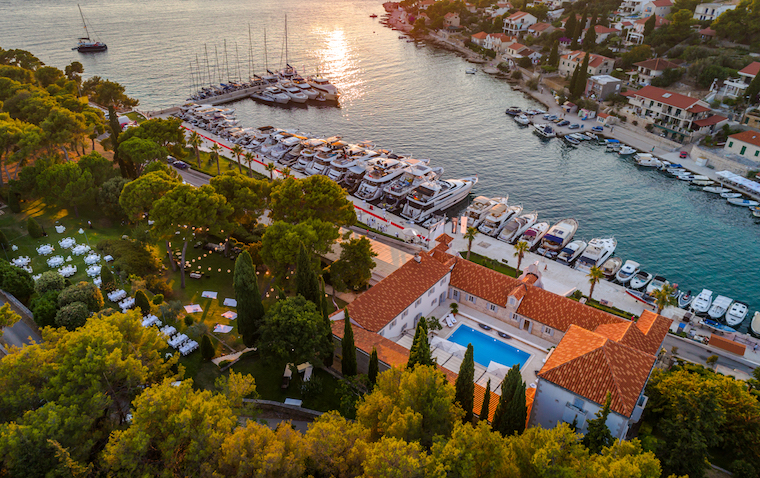