The Best Time to Visit Dubai is Right Now 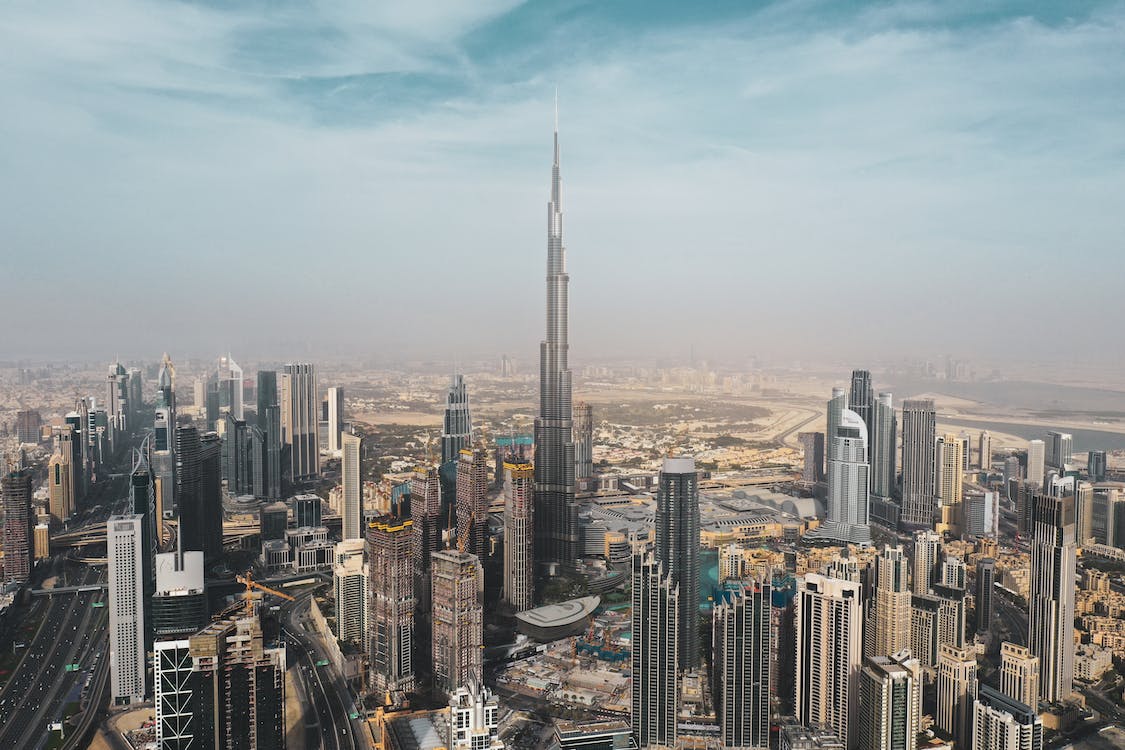 The largest city in the UAE is progressing fast.

Stardate 2071. I’ve just returned from OSS Hope, the United Arab Emirates’ space station floating 370 miles above Earth. From the shuttle on our descent to Dubai, I observed a cityscape needled with sky-scrapers that dwarfed the Burj Khalifa, the world’s tallest tower back in the 2020s. Autonomous drones zoomed past before we touched down and disembarked inside a neon-lit library that reminded me of a Yayoi Kusama installation – quite magical, really – though some of my fellow passengers seemed to prefer experiencing our virtual reality journey through the viewfinder of their phones’ cameras. How very 2022 of them.

For now, this optimistic vision remains an LED-powered mirage – one of the handful of exhibitions at Dubai’s new Museum of the Future, a boundary-pushing structure shaped like a giant silver lobster claw bedecked in Arabic calligraphy. It debuted to much fanfare this year just as the World Expo wrapped up, and tickets book out days in advance. 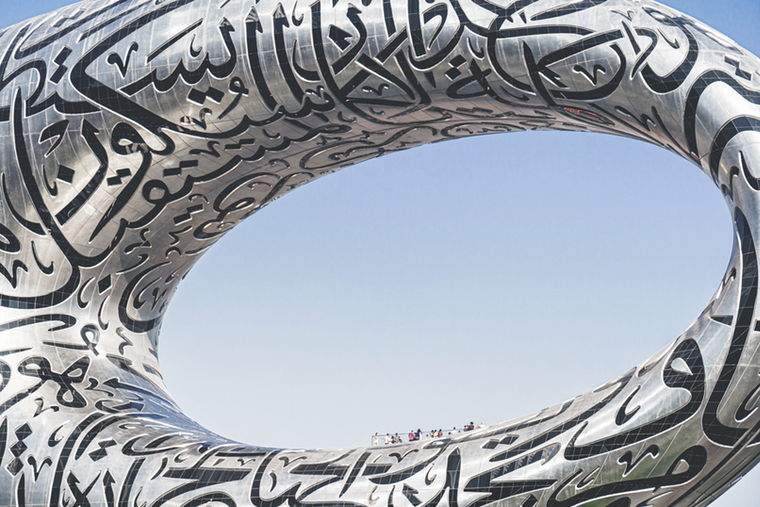 Dubai’s Museum of the Future is wrapped in calligraphic windows.

In reality, Dubai’s lightning-fast progression is palpable. In this giant sandbox of glass and steel, you can’t look anywhere without spotting at least a handful of cranes. Everywhere, construction workers are busy building towers higher and architecturally bolder than the ones already scraping the sky. Nothing seems impossible here.

The UAE’s largest city is one of superlatives, after all: a place of freezing ski runs in a desert where temperatures often surpass 100 degrees, of Rolls-Royces parked in front of one of the world’s largest malls, of condo towers so high that residents on the top floors start their iftar (a sundown meal breaking the daily fast during Ramadan) three minutes after those at ground level because the sun sets later from their vantage point.

To say that Dubai is having quite the run would be an understatement. As one of the first global tourism hubs to reopen during the pandemic (in July 2020), it became a haven for remote workers and perpetual sunseekers escaping mask mandates and lockdowns at home. Expo 2020, which delayed its opening until October of last year, delivered another boost: By the time of its final show at the tail end of March, the visitor tally had clocked in at almost 25 million. There’s the Museum of the Future, of course, and this fall sees the highly anticipated arrival of the Atlantis The Royal Dubai resort, with its 90-plus swimming pools and restaurants – a whopping 18 in total – by some of the world’s top chefs, including Heston Blumenthal and José Andrés. 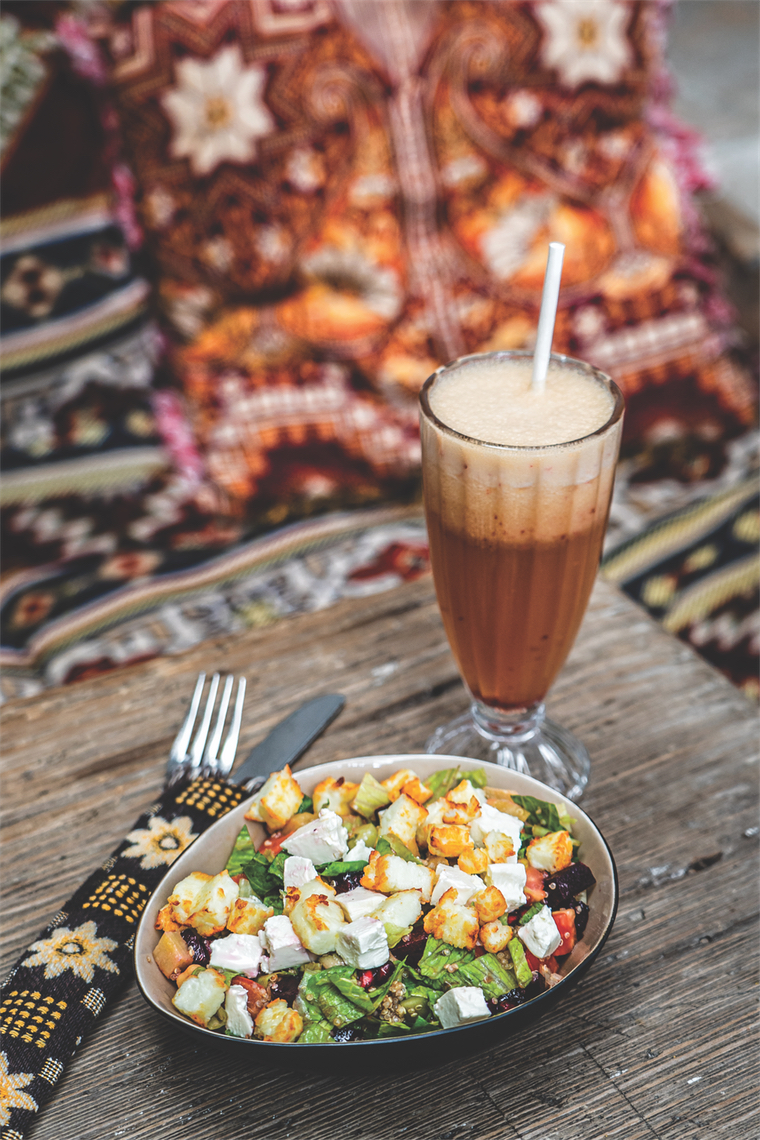 No wonder, then, that on any ordinary weekday morning, travelers will find the Jumeirah Al Naseem hotel buzzing with life. From my room, a lofty, cream-colored abode with a bed wide enough to comfortably sleep a camel, I overlooked throngs of vacationers dipping in and out of the Windex-blue Persian Gulf. They were only a fraction of the guests checked in at the rooms and villas composing Madinat Jumeirah, a beachfront jumble of resorts so sprawling I needed a map (and a buggy) to get around. Among its facilities: more than 40 restaurants, 19 indoor and outdoor pools, and a mile of sugar-white sand on which to spend lazy afternoons wondering how Jumeirah keeps the massive gardens so lush and teeming with birds.

Drive up or down the city’s coastline, and you’ll find a pick-and-mix of spots for year-round sunbathing, from humble public beaches to private stretches of sand with bottle service at thumping beach clubs. The infinity-pooled Drift Beach Club at the One&Only Royal Mirage gets top marks, but family-friendly Madinat has several other tricks up its sleeve: Wild Wadi Waterpark, with 17 swirling waterslides, including the fastest free-fall slide outside North America; and a full-fledged souk. It’s a beachside Disneyland for grown-ups, minus the costumed ducks and mice. 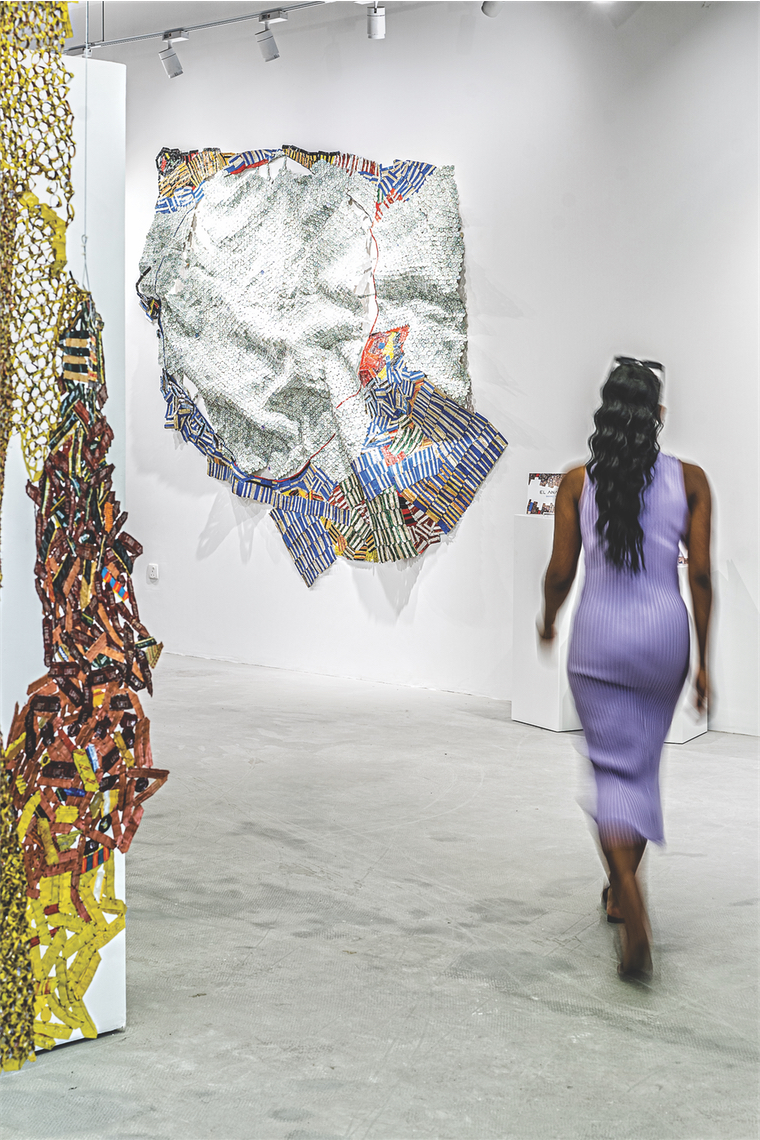 Though Dubai often grabs headlines for its glitz and over-the-top Saturday brunches, there are equal pleasures to be found in its simpler joys. One afternoon I strolled through the Old Town straddling Dubai Creek. In the Spice Souk’s incense-swirled alleys, Technicolor market stalls overflowed with everything from Gobstopper-size spheres of dried indigo and tiny rosebuds to crystalline teardrops of solidified acacia gum sold as a postnatal folk remedy. The droning syllables of the muezzin’s call to prayer echoed between the souk’s sandstone walls as droves of kandura-clad men shuffled to its source.

For a single dirham (about 25 cents), I crossed the creek on an abra, one of the traditional no-frills wooden ferries that ply the water 24 hours a day. This corner of town is home to Dubai’s oldest remaining building, the eighteenth-century Al Fahidi Fort, with its merloned walls and coral stone watchtowers in the crème caramel hue that defines most of the Gulf’s ancient architecture. Around the corner, the popular Arabian Tea House turns out tandoor-fresh flatbread and sweet karak tea with cardamom and milk – a wicker-chaired throwback to when locals sought refuge from the midday heat in breezy tea parlors rather than air-conditioned megamalls. The teahouse is perched on the edge of the historic Al Fahidi neighborhood, a labyrinthine enclave that was once a settlement for Persian merchants. They’ve long since left, their patched-up former homes now occupied by art galleries, courtyard cafés, and handicraft workshops.

Know where to look and you’ll find that razzle-dazzle Dubai is surprisingly awash with these rootsy creative ingenuities. One day I followed a local friend’s directions to Al Quoz, a dusty industrial estate adjacent to Jumeirah and Business Bay. Upon arrival, it looks like the part of town you’d hit up to get your car fixed: Mechanics’ workshops and freight forwarders occupy windowless corrugated-steel hangars. But my first impression was soon proved wrong. The neighborhood’s heart, Alserkal Avenue arts center, teemed with laptop-working, green-smoothie-drinking, yoga-mat-toting thirtysomethings. Starting with the arrival of Ayyam Gallery, ceramists, filmmakers, artists, and fashion designers have turned this former marble factory into Dubai’s creative epicenter. One of its tenants is Butheina Kazim, who founded the Gulf’s first arthouse theater, Cinema Akil, in 2014 as a way to bring Dubai’s 200 different nationalities together through film.

Looking down the avenue, I spotted a giant LED sign on a rooftop that read “When Will You Return”: an installation by NYC-based artist Mary Ellen Carroll. Before this visit, when the Dubai I envisioned was one of lavish overindulgence, I figured the city as one of those once-in-a-decade destinations – a fly-and-flop holiday spot for deep-pocketed revelers. Now, I can’t help but wonder what else from its past, present, and future awaits discovery. A hotel transfer by air, perhaps? Maybe I’ll hop on an electric flying taxi – the emirate has already rolled out test flights.